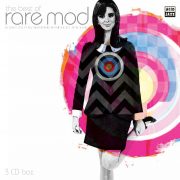 The seminal Acid Jazz Records Rare Mod series took its first desert booted steps in 2009 with a selection of ‘holy grail’ sixties recordings on an album entitled Rare Mod. such was its success that another five LPs followed, plus fourteen eps, four artist albums, two reunion concerts and two box-sets including this one, The Best Of Rare Mod box set. Involving a team of passionate individuals without whom sourcing the material would have been impossible, Damian Jones, Paul ‘Smiler’ Anderson, label boss Ed Piller and Richard Searle have compiled this triple CD collection of some of the highlight from across the entire series.

Some of the artists featured are more famous or more successful than others, some are sadly no longer with us, but all are equally inspirational; The Artwoods, The Fleur De Lys, Sharon Tandy, Carl Douglas and Geno Washington are familiar names amongst the record collecting in-crowd; The Mountain Men, The Aphex, The Koobas. Kenny Bernard and The Top Six are possibly less so.

From the dancefloor fillers like I’m Out by The Richard Kent Style, soul standards like Rock My Plimsol from the legendary Blockheads bassist Norman Watt-Roy’s first band The Ossie Layne Show, through to the wigged out garage R&B of The Mountain Men’s Too Many People Around, and the Velvet Underground cover, I’m Waiting For My Man, by David Bowie’s first group The Riot Squad. But it’s the rediscovered treasures throughout the series that may have remained lost that are perhaps the most interesting; Derek Griffiths (guitarist of The Artwoods), whilst rummaging through a cardboard box, uncovered a forgotten concept album by his jazz-rock outfit, Satisfaction; the flute-tastic House Of The Rising Sun features along with another fantastic track from another of Derek’s later bands, Dog Soul, a version of the Eddy Floyd classic Big Bird.

The EP’s tracks deliver the classic 60s Soul & Funk sound that the Rare Mod Series is famous for.

Featuring a version of Rod Stewarts’ ‘Rock My Plimsoll’ and Sly and The Family Stones ‘Sing A Simple Song’.

A collectors item for those who collect the Rare Mod Series and an interesting item for Ian Dury & The Blockheads fans!